It seems that gold is looking to build on its first weekly rise since the start of June. On July 17, gold climbed above “the technically important 200-day moving average at $1,230 an ounce.” Carsten Fritsch of Commerzbank stated: “If it were to rise above this level in any lasting fashion, we could see technical follow-up buying.”

In regards to August delivery, gold increased $5.20 (0.4%) to $1,232.70 an ounce. According to FactSet data, Friday’s settlement at $1,227.50 an ounce was the highest finish since June 30 and the strongest single-session advance since June 6. After posting losses in each of the past five weeks, prices recorded a 1.5% weekly gain. 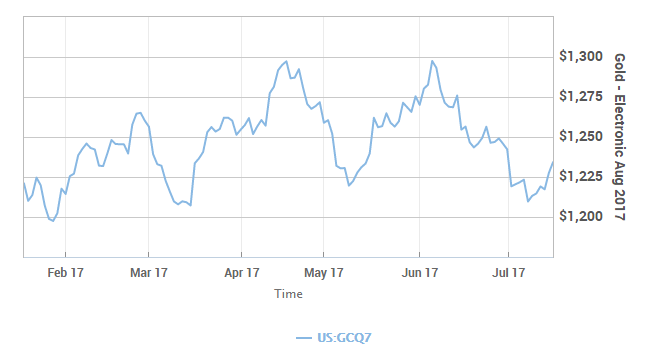 Even though the ICE U.S. Dollar Index recovered on Monday from last week’s drop, the up move (less than 0.1%) wasn’t enough to spoil gold’s advances. For investors, it’s a known fact that commodities priced in dollars will increase when the dollar weakens, thus making those assets cheaper to buyers who use weaker currencies.

The most recent economic data might provide insufficient support for the Fed to lift interest rates at least once more this year and decrease its $4.5 trillion balance sheet. Keep in mind that lower rates are usually supportive for gold, which doesn’t offer a yield.

According to Janet Yellen, the Fed Chairwoman, federal-fund rates don’t need to rise significantly to “get a neutral policy stance.” In response, Adrian Ash from BullionVault stated: “The longer rates stay near zero, the more crucial to market sentiment central banks become. So the more gold will swing as policymakers flip-flop on daring to raise rates.” He added that this will go double for silver. “Its smaller market size makes it look like the perfect playground to hot-money hedge funds wanting fast moves to leverage.”