That is what they used to say to immigrants after World War II about this unsuspecting swathe of Southwestern Montana. In those days, the hills of Butte made plenty of men rich beyond their wildest dreams. For decades, it was the home of legendary miner Anaconda and its world-famous Butte copper mine. Today, mining for the red metal continues in Butte. Now another big discovery nearby is being written in the rich history of Montana mining lore.

Broadway Gold Mining (TSXV:BRD) Ltd.’s Madison copper-gold project is showing “some of the highest grades intercepted in the Western United States in recent memory,” as stated by CEO Duane Parnham, and a recent technical report only further validates that fact.

The NI 43-101 technical report for the Madison project conducted by the Metal Mining Consultants Inc. backed up Parnham’s claims to the letter. The report confirmed the viability of the two-mile gold-copper skarn and verified the deeper-seated porphyry system that reaches depths below the 600 level. Furthermore, the technical report seconded the notion that good things are ahead for the Madison Property.

“Thus far, Broadway has identified a nearly two-mile-long geochemical and geophysical trend that is interpreted to be a copper-gold porphyry system,” wrote Scott E. Wilson, C.P.G., of Metal Mining Consultants. “Interpretation of mineralization controls at Madison have yielded results that may well change the game for Broadway. It is the author’s opinion that the Project will continue to yield positive growth for the foreseeable future.”

In addition, the technical report recommends a successive Phase III drilling program. The Phase III drilling program commenced in mid-September but only covered 30% of the area. Continued drilling analysis is necessary and will provide prospects for the extraction of the deep mineralized zone, or as the author Wilson concluded, “…the Madison Project is a property of merit requiring continued exploration and development.”

More Than Enough Reason for Optimism

While this news is exciting, it does not come as a surprise with the high-level of data Broadway has presented about the Madison project, specifically the new latiteporphry zone. The technical team at Broadway has proven themselves to be first-class – and as a matter of fact, the technical report even says, “The Broadway technical staff have demonstrated a keen understanding of copper-gold skarn mineralization.” And now with a corroborative technical report in their back pocket, the whole company has room to be optimistic.

Taking a step back, the company’s Phase I and Phase II drilling programs, which targeted the shallower skarn zones at Madison, have delivered extremely high-grade gold and copper intersections. After 19 surface holes, the drilling resulted in the discovery of a larger jasper zone with abundant native copper and gold. Results included 1.725% Cu and 0.097 grams per tonne (g/t) Au over 49.4 meters in hole C17-16, including 2.571% Cu and 0.151 g/t Au over 30.2 meters. Hole C17-17 returned 1.020% Cu and 0.159 g/t Au over 31.1 meters, and hole C17-20, drilled into a massive-sulfide zone that remains open at depth, returned 1.247% Cu and 1.843 grams per tonne (g/t) Au over 23.8 meters. According to the company, these results from the jasperized body were some of the “longest and strongest copper intersections to date,” continuing to lead to the conclusion that what remains under the ground at Madison is mammoth compared to what has previously been extracted.

Here is another section of the report that lays out the deep-seated exploration findings:

“The exploration drilling performed by Broadway Gold at the Madison project has already drilled 19 surface (3,984 m) and 7 underground (338 m) drill holes,” the report states on page 52. “The drilling has resulted in the discovery of a larger jasperoid zone with abundant native copper and gold. Results included 1.725% Cu and 0.097 g/t Au over 49.4 meters in hole C17-16, including 2.571% Cu and 0.151 g/t Au over 30.2 meters. Hole C17-17 returned 1.020% Cu and 0.159 g/t Au over 31.1 meters, and hole C17-20, drilled into a massive-sulphide zone that remains open at depth, returned 1.247% Cu and 1.843 g/t Au over 23.8 meters. Drill hole C17-02 cut through the projected jasperoid interval above the 400-foot level and did not intersect any jasperoid. This suggests that the copper zone potentially begins at approximately 300–400 feet vertically below the surface and plunges to the northwest. Results from drill hole C17-10 have confirmed that a high-grade sulphide mineralization exists in the area adjacent to the underground infrastructure, as well as indications of a potential second nearby massive sulphide zone.”

Now, the Phase III program will fully explore the porphyry system that significantly resembles Barrick’s lucrative Golden Sunlight Mine. As a way to gauge the significance of that comparison, in 2016, the nearby Golden Sunlight mine produced 34,000 ounces of gold at a cost of sales of $1,512 per ounce and all-in sustaining costs of $1,493 per ounce.

“Pebble dikes, limestone breccias, marble breccias and polylithic breccias containing clasts of marble and minor skarn, gossan, jasperoid and occasionally visible gold have been identified in drilling and mapping,” the technical report states on page 39. “The possibility of the presence of mineralized breccia pipes should be kept in mind as exploration continues because these features are important ore controls at other porphyry and skarn systems, including the Golden Sunlight Mine fifteen miles to the north, the Elkhorn deposit near Boulder, Montana, and the New World deposit near Cooke City, Montana.” 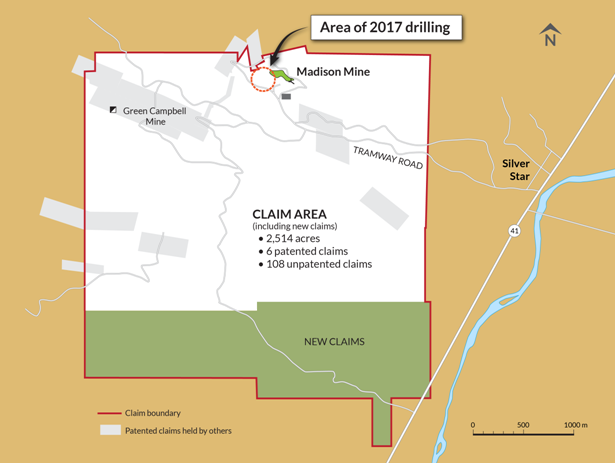 Putting the Bow on a Banner Year

To boot, overseeing the Phase III drilling endeavor, Broadway Gold has brought on board Phillip Mulholland, a senior geologist with 32 years of experience and detailed knowledge of Montana’s Butte region, specifically at the Golden Sunlight Mine.

Besides the nice addition of Mulholland, Broadway is run by the savvy and experienced Parnham, who is working on three decades of developing resource companies for investors. Broadway Gold will be his fourth resource company; most notably, the CEO founded UNX Energy and sold it later for C$730 million. With his track record of creating over C$1.2 billion in shareholder value over the span of his career, there’s plenty of reason for excitement extending beyond this technical report because Parnham and his chosen team have shown they know what they are doing.

Investors definitely agree. Earlier this year, Broadway Gold completed a non-brokered private placement by issuing a total of 2,811,114 Units at a price of $0.90 per Unit for gross proceeds of $2,530,002.60. The proceeds are now funding the Phase III drilling program, which could shed light on this massive sulphide anomaly.

“If we can prove that the porphyry target is consistent with our geological model, not only will the Madison project be a company maker, it adds a third dimension to the native copper skarn zone and massive sulphide potential from a mining perspective,” said Parnham in an announcement when drilling commenced.

This important Phase III drill strategy is also intended to extend the copper- and gold-bearing mineralization trending to the northwest from the Madison Mine. The company is aiming to build upon impressive assay results from the zone, and with this technical report to back them up, there should be plenty of investors with interest in what is below ground at the Madison property.

Thus far, 2017 has shaped up to be an impressive year for Broadway Gold, and as 2018 comes into view, the next piece of the puzzle for Parnham and his team might just force people to start talking about Butte like they did back in the old days.

In the interest of full disclosure, we call the reader’s attention to the fact that Equities.com, Inc. is compensated by the companies profiled in the Spotlight Companies section. The purpose of these profiles is to provide awareness of these companies to investors in the micro, small-cap and growth equity community and should not in any way be considered as a recommendation to buy, sell or hold these securities. Equities.com is not a registered broker dealer, investment advisor, financial analyst, investment banker or other investment professional. We are a publisher of original and third-party news and information. All profiles are based on information that is available to the public. The information contained herein should not be considered to be complete and is not guaranteed by Equities.com to be free from misstatement or errors. The views expressed are our own and not intended to be the basis for any investment decision. Readers are reminded to do their own due diligence when researching any companies mentioned on this website. Always bear in mind that investing in early-stage companies is risky and you are encouraged to only invest an amount that you can afford to lose completely without any change in your lifestyle. Equities has been compensated with cash, common shares and/or warrants for market awareness services provided.

Article syndicated under license from Zacks via QuoteMedia.

Gold Prices Momentarily Surpass $1,300 an Ounce Before Pulling Back to Settle Lower

Gold prices have been fluctuating today. On Friday, August 18, prices of the metal reached their highest intraday level of 2017, momentarily surpassing $1,300 an ounce before pulling back to settle lower for the trading …