The stock market has been in dire straits for the better part of the week; on Monday, the Dow Jones Industrial Average suffered its biggest fall since 1987. The coronavirus pandemic has sent the markets into a tailspin, and despite the rate cut from the United States Federal Reserve, no drastic change has been seen yet. When such crashes take place, investors become nervous over blue chip stocks. The movements in these stocks have a massive impact on the market.

Some blue chip stocks have been affected severely by the coronavirus pandemic, and it is important for investors to know about these impacts before they consider investing in those stocks. These stocks could slump further, if experts are to be believed. Goldman Sachs has warned that the market could fall by a further 16%, and in such a situation, many large-cap stocks could come under intense selling pressure. On that note, investors should take a closer look at these three blue chip stocks that have suffered considerably due to the coronavirus pandemic. 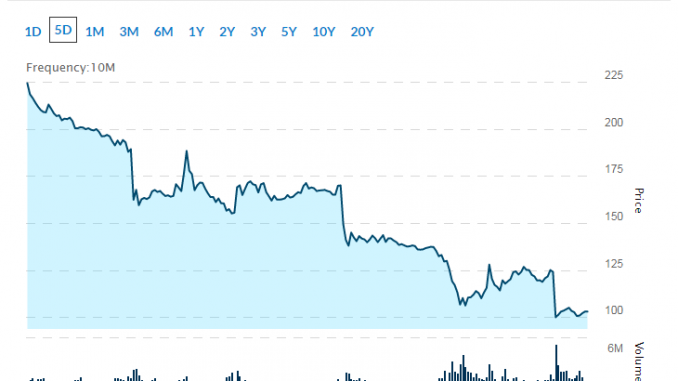 One of the biggest large-cap losers these past weeks has been Boeing. The stock has lost 70% over the past month, and it seems that the worst might not be over yet for the multinational behemoth.

The company was already in trouble due to the 737 Max crisis, and the coronavirus pandemic has compounded the company’s problems. On Tuesday, it emerged that Boeing might be approaching the United States government for loan guarantees to the tune of “tens of billions” of dollars.

Last week, Boeing reported that it has had 28 order cancellations. During the same period last year, Boeing received 49 orders. Since the company is now dealing with massive cash burn, Boeing could try to draw the entirety of its $13.825 billion loans from a series of banks.

However, the liquidity crunch at Boeing is now a reality, and the company is currently in discussion with the government. It is believed that Boeing has asked for massive government support in order to meet its liquidity needs. It remains to be seen how Boeing stock performs in the coming days. 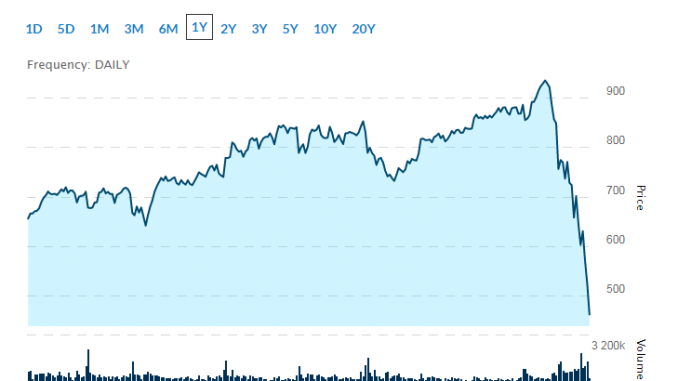 Another large-cap stock that suffered significant losses in recent times is that of fast-food chain Chipotle Mexican Grill. Chipotle has been one of the worst-hit large-cap stocks during this coronavirus pandemic. Over the past month, CMG has lost 50%, and as the pandemic intensifies, the stock could witness further pressure.

Due to the coronavirus outbreak, authorities have instructed restaurants to close, an action that puts intense pressure on Chipotle stock.

In addition to that, the work-from-home policy that is now being adopted by hundreds of companies across the United States may also have an effect on restaurant stocks like Chipotle. For instance, Connecticut, New Jersey, and New York put a ban on restaurants on Tuesday. The three states have a combined population of 30 million people, and missing out on such a large number of customers would be hard for any company.

However, Chipotle has grown its delivery channels in recent times and has announced that it is going to offer free deliveries until the end of March. 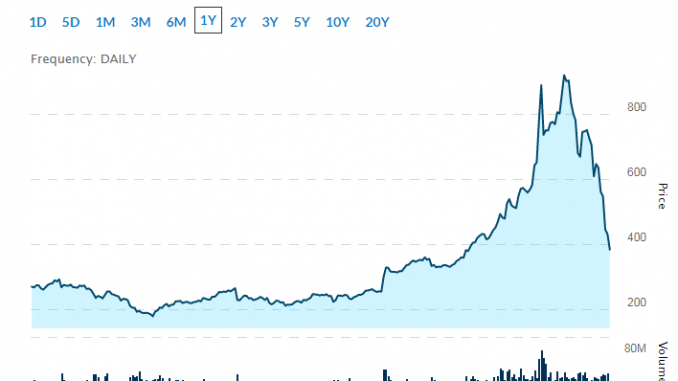 Electric vehicle manufacturing giant Tesla has taken a major beating over the past weeks. Since the middle of February, TSLA stock has tanked by 60%, and the coronavirus panic has sent its stock on a tailspin over the past few days.

The coronavirus pandemic has affected most companies in the automobile sector, so Tesla’s performance has not been surprising. However, it should be noted that Tesla is fundamentally in a strong position as far as its underlying business is concerned. The selloff is entirely predicated on the current state of the market.

3 Beaten-Down Stocks That Could Bounce Back in 2020

2019 began with speculators pondering the possibility of a bear market and finished with the biggest yearly gains since 2013. This time last year, the idea that the S&P 500 would post gains of nearly …

Here Are the Five Best Performing S&P Stocks of 2019

For most markets, 2019 was a banner year. The last 365 days saw serious growth for a variety of sectors, but—as always—some stocks performed significantly better than others. To commemorate the year that was, we’re …

Christmas Eve was a rough day on Wall Street. Just before the holiday, investors began dumping major stocks, shocking everyone. Netflix (NASDAQ:NFLX) was one that hit its year-low on that day but has since rebounded …